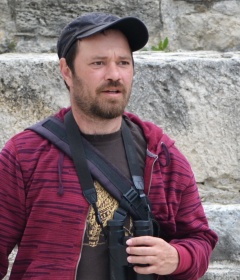 Full-time wildlife guide and tour leader. Martin designed many of the holidays included in this web site.
Besides guiding he works for an NGO and scouts new destinations across eastern Europe.
He has led or co-led over 100 wildlife holidays during past 20 years. He will accompany you on our birding, butterfly and botanical tours. Martin is also into macro photography which has recently led to creation of Arnika Photo Tours.
Alena Rulfová

Alena comes from the landscape protected area ​​České středohoří in the northwest of the Czech Republic. The steppe typical of this region has been very close to her heart, and it is no surprise that even during her ornithological trips around the world, she was most popular with Andalusia and Extramadura in Spain. She also likes to tour Southeast Asia. Alena offers individual birdwatching in the Czechia and will accompany you on our bird tours as well.
Dime Melovski

Dime is foremost Macedonian lepidopterist who works for renowned NGO called Macedonian Ecological Society. Dime is now the key authority who revises the old data on Macedonian butterflies. Another Dime’s major activity is Balkan Lynx Project. He is very friendly and fluent in English and will guide the butterfly tours to Macedonia. With him we hope to uncover some new corners of this beautiful but little known country.
Lukáš Spitzer

Lukáš made his grade on butterflies and leads a research on Large Blue and Niobe Fritillary in his region, West Carpathians. He concluded his PhD. studies a few years ago and besides his regular occupation in a museum he also works for the Czech Academy of Sciences. Lukáš guided butterfly tours for Naturetrek and travelled extensivelly to Altai, Africa, Balkans and eastern Europe. He will guide butterfly tours to Slovakia, Macedonia and Romania. 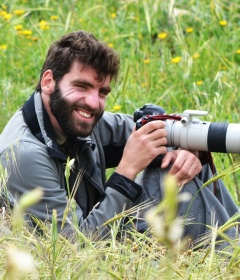 Native to Cyprus, George moved to lake Kerkini seven years ago. He has travelled widely through northern Greece since then. He works for Kerkini Man. Authority and studies forestry at Thessaloniki. George is as pleasant companion as one can imagine and you will merge into everyday Greek life and history with him. He is also keen wildlife photographer focusing on mammals and birds. Due to local contacts, George will use an up-to-date information on where to locate birds.
Robert Doležal

Robert Doležal lives in Brno, second largest Czech city. He graduated from forestry. He founded and manages web site www.birdwatcher.cz which ranks to the best East European bird pages. He is also founder of Club300 where gather people who run various bird lists. He knows very well South Moravia where he is based and the rest of Czech Republic. Most recently Robert has become the foremost Czech translator of bird identification guides.
Martin Waldhauser

Martin is a Czech dragonfly expert. He is one of the authors of „The Dragonflies of the Czech Republic“, probably the biggest dragonfly book ever published. Martin is in his fourties and you cannot wish a better companion and dragonfly enthusiast to guide you through the north Bohemia where he lives and works at Landscape Protected Area Luzicke hory. He will give lectures in field and one or two slide shows before dinner. Martin and is also a renowned dragonfly photographer.
Danka Uzunova

Danka is a young Macedonian birdwatcher of the upcoming generation. She studied ecology, published several papers and worked for Macedonian Ecological Society, the leading NGO in the country. Besides being fluent in English, Danka is an extremely friendly person and knows all areas that we visit from her field research work. Always proud of her beautiful country she wants the clients to see the very best of it.
Vasko Avukatov

Vasko Avukatov works as a GIS analyst in the NGO Macedonian Ecological Society, on national and regional issues involving endangered species, landscape ecology and sustainable development. He is a senior member of the Biology Students’ Research Society NGO. Vasko escorts our Balkan tours to Greece, Serbia and his native Macedonia. Reliable driver and great companion who has restarted his interest in butterflies.

Marek accompanies our butterfly tours. He is a vintage lens refurbisher and collector. He travelled widely in many countries of the Balkans and SE Asia. He is also active in popularizing butterflies in his native Czechia. As one of the admins of Butterfly Jewels Facebook page he services around 3000 butterfly lovers. Marek is still active in butterfly monitoring all over Czechia. You can meet him on butterfly and macro photo tours.
Dušan Šácha

Dušan will accompany you on our dragonfly tours. He is one of the foremost Slovak dragonfly experts with unsurpassed knowledge on dragonflies of north Slovakia. He gives lectures on dragonflies on our tours complemented with a screening of his documentary “A Year in the Life of Dragonflies” and a slideshow of dragonflies and their habitats.

Owner of ECOTOURS Hungary, a long established wildlife tour operator to Europe and Latin America. Gábor will accompany you on our bird tours to Hungary, Belarus and several other destinations. He also runs with his friend Andrea a traditional lodge in Kiskunság area south of Budapest where our Poľana and Kiskunság tours are based. Gábor has travelled widely all around the world, most extensively to Latin America where he has second home in winter.